OHS Choir performs, "Why We Sing"

OHS Choir performs, "Why We Sing"

Matt Gilman is in his eighth year as Director of Bands for the Ontario School District, and his nineteenth year in the district.  He taught previously in Provo, Utah, and in Nyssa, Oregon.
Mr. Gilman is originally from Smithfield, Utah.  He holds a BA Degree in Music Education, with a Minor in Finnish, from Utah State University, and he earned a MMus. in Conducting from the American Band College (Southern Oregon University).  His major instrument is Clarinet, and he has performed with The 25th Army Band (IDARNG), Salt Lake Symphonic Winds, and most recently, the Treasure Valley Concert Band.  He has performed as a soloist with the Treasure Valley Symphony and the Fruitland High School Band.

The mission of the Ontario High School Band is to achieve high standards of music education and music performance. The OHS Band facilitates the musical enrichment of the student membership of both the High School and feeder schools and promotes the place and value of music in our community. Band participation plays a significant role in the cultural, intellectual, and social lives of young adults, fosters fellowship and goodwill among its members, as well as provides its members with opportunities for personal growth and leadership.
Band students are involved in many other things at OHS in addition to Band.  Band members play sports, including football, basketball, wrestling, track and field, tennis, and baseball. They sing in Choir and perform on stage with the Theatre Ensemble.  They are involved in clubs such as National Honor Society (NHS), Future Hispanic Leaders of America (FHLA), and FFA. Band members are involved with student body leadership and can be seen helping to build the image of OHS in the Community.  There is a place for everyone in the OHS Band!

The most visible of any performing group at OHS, The Tiger Marching Band kicks off the year a week before school begins by preparing a field show, usually of popular or familiar tunes and accompanying visual drill, that is performed for OHS home football games, as well as local competitions.  Marching Band meets during Fall Trimester, and there are plenty of opportunities for student leadership during this time of the year.
In 2019, the band has a successful season with its show entitled "Styx n Stones."  The Tiger Band placed in the top three in each of its competitions in its division and received caption awards for outstanding visual performance, and outstanding music performance.

Ontario High School used to be well-known for its Jazz Band.  It was eliminated in 2010, but has made a comeback in 2019.  Currently, Jazz Band is taught 5th period and is a place for the best concert and marching band students who want to explore music performance in a different way.  Emphasis is placed on learning how to play stylistically correct, as well as on improvisation. The Jazz Band also serves as the Basketball band at OHS.
Concurrent enrollment in Marching or Concert Band is required in order to play in Jazz Band.  Jazz Band meets each trimester

The Concert Band at Ontario High School is the flagship performing ensemble in the instrumental music program.  In Concert Band, students gain fundamental skills that will allow them to become more artistically expressive, and that will carry over into other facets of performing.  This band prepares music for festivals and concert performances in late Winter and Spring.  If the band scores high enough at district festivals in March, the Band could qualify for the State Contest in Corvallis at OSU. 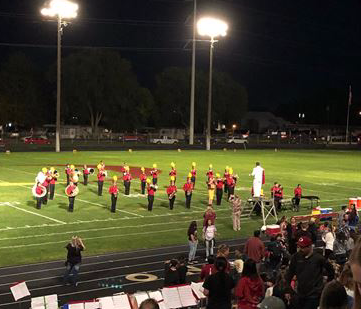 Natalie Stone is currently in her first year of being the Director of Choir for the Ontario School District. Previously, she has taught in Caldwell, Idaho, as an elementary music specialist. Mrs. Stone received her BA Degree in General Music at Northwest Nazarene University with her main instrument being voice and piano. She then received her credentials through Boise State University. Currently, Mrs. Stone is attending Boise State University to receive her Masters in Music Education. Natalie Stone has a passion for choral conducting having taken many Choral conducting workshops and co-directing many groups throughout her professional life. She loves working with secondary education students and looks forward to making music with them every day.
Choir at Ontario High School
The mission of the Ontario High School Choir Program is to provide musical opportunities for students while achieving the high standards of music education and music performance. The OHS Choir provides a space for students to come, make music, and be apart of a community. While participating in the choral program here at OHS, students learn not only the techniques of good singing and music literacy, but also teamwork, perseverance, and self-pride.
Along with the talents they share in choir class, choir students are also involved in many other activities around the school. Choir members are involved in sports, band, and perform on stage with the Theater Ensemble. They are involved in clubs such as National Honor Society (NHS), Future Hispanic Leaders of America (FHLA), and FFA. Choir members are involved with student body leadership and can be seen helping to build the image of OHS in the Community. Everyone is welcome in the OHS Choir Program!

Voce Tonante (Voices of Thunder) is an auditioned group for students who want to be challenged in music. Being an auditioned group, students participating in this group dive deeper into learning music theory, technique, and more challenging repertoire with a variety of genres. Voce Tonante participates in several festivals throughout the year including the Idaho Youth Barbershop festival which takes place in September. At this festival, students learn how to sing barbershop music with hundreds of students all throughout the Treasure Valley.

Tiger Choir is a non-auditioned group for anyone who loves to sing. Students will learn basic singing and performing techniques throughout the year including sight-reading, multiple part singing, and basic music theory. This group gets to sing a variety of genres including classical, jazz, pop, and music theater. Tiger Choir is currently getting prepared for their concerts throughout the year. Those concerts are Fall, Winter, and Spring Showcase. They are also preparing to impress the judges at festival which will take place in April.

Music Theory is a trimester long class that takes place in the fall trimester.  This class can be taken by any student and is encouraged for students wanting to participate in choir or band. By the end of the course, students will have learned the basic music theory that is covered in the first semester of a collegiate level music theory class. Students will also learn basic song writing abilities including using a music notation software, interpreting poems for lyrics, and in the end writing their own song.

Music History is a trimester long class that takes place in the winter trimester. This class can be taken by any student and is encouraged for students wanting to participate in choir or band. By the end of the course, students will have a deeper knowledge of how music has developed by learning/comparing/contrasting musical eras. Students will leave the class with a portfolio of notes for each era and several reports of composers throughout history.

Music Appreciation is a trimester long class that takes place in the spring trimester. This class can be taken by any student and is encouraged for students wanting to participate in choir or band. This course walks through the many genres found today. Students will learn the history, style, and technique that goes with each genre. By the end of the course, students will have listened/analyzed several types of genres and have practiced their songwriting skills as they practice writing music in each genre.

Tri-M is a student let club that helps 1-2 times a month after school. This club is for anyone who is in a music class and would love to do more musical activities outside of the school setting. Through performance and community service, they'll develop confidence, creativity, critical thinking, compassion, and a host of other leadership skills sure to serve them will in school and beyond.

Items are subject to change 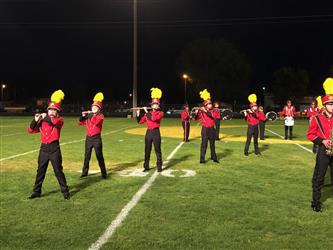 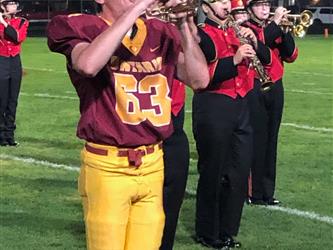 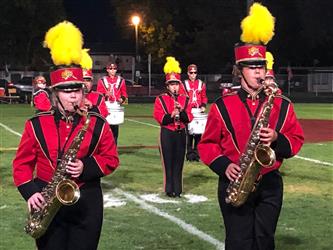 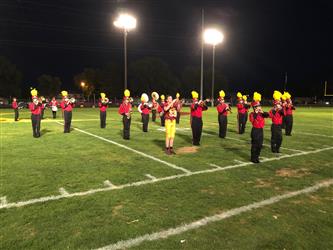